One of my favourite bands, 30 Seconds To Mars, released their fifth studio album AMERICA on April 6th earlier this year; five years on from their last release, Love, Lust Faith and Dreams in 2013. It’s an incredibly vast change in direction from any of their former music, delving into new genres and sounds we’ve not heard from them before.

The first single from the album was ‘Walk on Water’ released last year. I remember learning about this song only by it appearing in my ‘Release Radar’ playlist on Spotify, and immediately getting really excited – it had been a long time since they’d released any music, and I couldn’t wait to hear what they’d come up with.

I wasn’t disappointed; Jared Leto’s ever-flawless vocals carry the track and it was a song that would transition fans of the band into the new album – not too adventurous, but still brilliant. From that point on, I was all about 30STM again.

When the second single ‘Dangerous Night’ came out January this year, I was all over it, and yet again, loved it. Another extremely memorable and catchy song, and it took us one step closer to the electronic sound that the band were exploring – it’s produced by Zedd, so you know the instrumental is going to be good.

Upon the album release, I immediately downloaded it and took to listening to the whole thing in its entirety. Before I did, a couple of things struck me. The unusual album artwork, for one – it actually has 10 covers, each in the same format – a few words written on a coloured background. The one Spotify has opted for is a pink background with the words ‘Kim, Justin, Jesus, Michael, Mickey, Donald’ on it. It’s clear to see that this cover is meant as a social commentary, a depiction of modern America. Here are the ten covers: 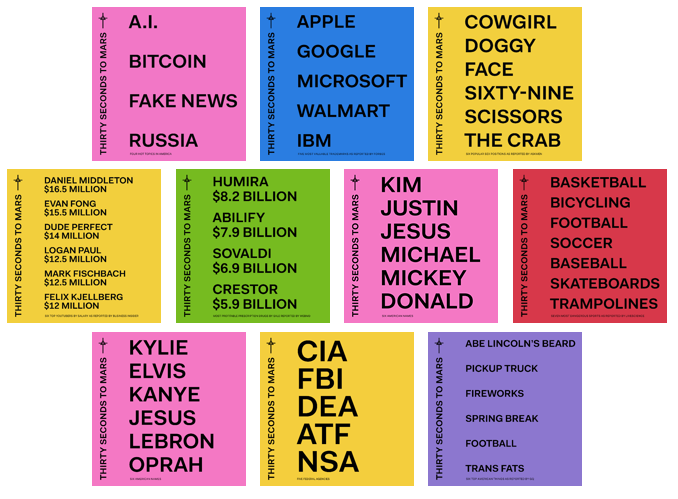 The second thing I noticed was the features on the album. Halsey and A$AP Rocky?! Two very relevant and inherently different artists to the 30STM we recognise. I wasn’t going to assume anything however, knowing the artistry of 30STM was exceptional and I knew they’d have created some kind of magic.

The album begins with the first two released singles, ‘Walk on Water’ and ‘Dangerous Night’. The most recent single, ‘Rescue Me’, released last month, is third. When I first heard the latter, my mind was blown. From the moment it started I knew it was different – and in an exciting way. It had an electric sound to it, but with Leto’s traditional voice. 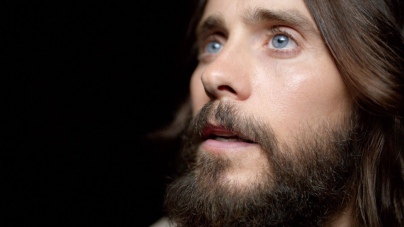 As the song progressed, the energy builds and builds until… the thing no-one could’ve expected… a drop. Like, the drops in house or dance songs. On a 30 Seconds to Mars song? Part of me was like, what is this? This is a shock, a switch up in the band’s sound I couldn’t have suspected.

But the other, much larger part of me was like, oh, yes. This is what I’m talking about. When the initial surprise subsides, you can fully appreciate this song and the direction it has taken the band’s sound. Gone is the alternative rock sound of their early 00’s music, and in its place we have a sound described as electronic and artpop, a brave and surprising switch from their previous music but one that has been meticulously crafted. Amazing, and guaranteed to have you dancing.

Next on the album, we’re treated to ‘One Track Mind’, the song featuring A$AP Rocky. The electronic sound continues, a stripped-back track that explodes to life as it goes on. It’s another song with a drop; this one less in-your-face and more relaxed, but no less impactful on the pleasure sensors in your brain. This song encapsulates the sound 30STM wanted to create with this album, and is enhanced by the appearance of A$AP Rocky towards the end.

This is a collaboration no-one could’ve expected, and for it to work this well? No-one saw this coming, and the surprise is definitely a pleasant one. The A$AP member offers a nice nod to the band with the line ‘I heard it’s only 30 seconds to Mars, but it’ll take you even less just to get to my heart’, followed by the drop. Exquisite.

A couple of songs later – I can hardly believe this either – is Halsey’s feature, ‘Love Is Madness’, and I was stunned. This song is arguably the album’s best, if anything because Jared and Halsey’s voices are unbelievable and compliment each other amazingly. The song starts with them alternating lines and continues in this way, a chilled-out start that bursts into an energetic and fist-pumping chorus of genius. I can’t wait for the inevitable single release of this song. 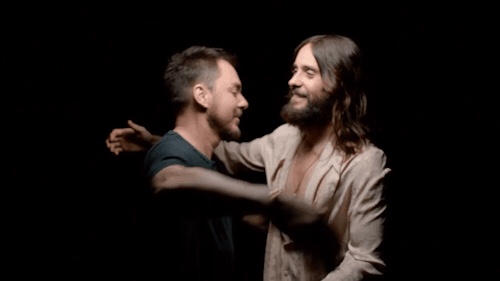 Classic 30 Seconds to Mars sounds can be found on the album too; those reminiscent of the 2013 sound will find solace in ‘Great Wide Open’ and ‘Dawn Will Rise’. The elements of electronic are threaded throughout, but the euphoric feeling often affiliated with 30STM music is really felt through these two in particular. ‘Hail To The Victor’ fuses the new and old sounds together in a refreshing track that you wouldn’t be blamed for mistaking for a remix of an older song. ‘Remedy’ brings the energy and tempo way down, in a song that showcases Jared Leto’s brother and fellow bandmate Shannon Leto’s voice, as he sings over an acoustic instrumental. This is a nice relaxed song after the madness of the middle part of the album. Anyone who misses This Is War will love the penultimate ‘Live Like A Dream’, another more laid-back song with epic moments of Leto roaring into the mic – the stuff that dreams are made of.

‘Rider’ is the perfect end to this album, which certainly takes you on a ride and journey through a plethora of new sounds and feelings. It gives us an epic conclusion to an outstanding album, one for which I truly cannot understand bad reviews. It’s not an album for those who resist change, those who don’t like bands ‘exploring new avenues’ and adapt as their style and journey as a band progresses. I would liken this album to when Fall Out Boy switched up their style on ‘Centuries’ on American Beauty/American Psycho and more recently ‘Young & Menace’ on M A N I A.

If you’ve never heard 30 Seconds to Mars, this is an interesting place to first introduce yourself. It’s not an album many will recognise as their music, and if you were a big fan of their really early music this might not be for you. However, it’s important to note that the darker sounds of earlier albums have been replaced with positivity, brightness and energy that will rouse you, empower you and above all, leave you feeling like you really enjoyed the music you listened to. A fantastic musical feat by 30 Seconds To Mars, and one I continue to be obsessed with 3 months later. I can’t recommend it enough.

It snowed
❄️
Firework night etc
Lost this wonderful woman a couple of days ago. here’s a few pictures I had to hand.
🚝
Impossible to take a bad sunset pic
Some Porto

Check out my football articles published on The Footy Faithful