Luke Reviews – The Spy Who Dumped Me

The Spy Who Dumped Me, to a presumptuous sceptic who’s only seen the trailer, seems like a cutesie best-friends-forever-in-turmoil film that’s going to be a comedy with scenes of weak action in. I can tell you, that that presumptuous sceptic was me, and I couldn’t have been more wrong. It’s a fun-filled adventure with really violent action, lots of laughs and an engaging plot, which keeps you entertained and guessing with lots of narrative twists and turns.

Described as an action comedy, The Spy Who Dumped Me follows best friends Audrey (Mila Kunis) and Morgan (Kate McKinnon) who become caught up in a dangerous mission after Audrey’s ex boyfriend Drew (Justin Theroux) turns out to be a CIA agent. Thus ensues a dramatic journey through Europe, as Audrey and Morgan battle their fair share of enemies to prevent a harddrive getting into terrorist hands.

The cast speaks for itself in this one. Mila Kunis is sensational, and her chemistry with McKinnon makes their on-screen relationship authentic. Justin Theroux plays ‘the spy who dumps Audrey’ Drew, and there’s strong support from Sam Heughan and Hasan Minhaj as smooth talking agents and Gillian Anderson as the head of the secret organisation, as well as Ivanna Sakhno making for a very creepy and formidable antagonist in the sadistic gymnast Nadedja. 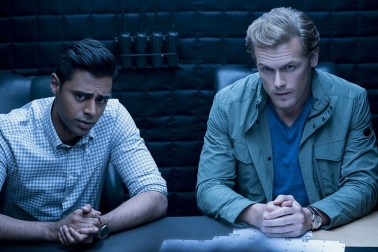 This is an entertaining and enjoyable film, but it has its flaws. It finds itself in an indecisive to and fro between exquisite and quite brilliant action scenes, and light-hearted jokiness (McKinnon does excel in this area). We go from seeing intense action full of violent killing, to Morgan calling her parents  for a funny catch-up. It means that the mood often juxtaposes from one scene to the next, and you can’t help but feel like this film is a good concept that needs to make up its mind.

There is plenty about this film to be admired, however. Spy-film motifs are aplenty; Hidden identities, gadgets, terrorist threats, disguises and weapons pay homage to the title’s influence – James Bond’s The Spy Who Loved Me. As aforementioned, the action is unbelievable; intense shootouts, jaw-dropping stunts and high-octane car chases really get the adrenaline running as our characters battle bad guys from New Jersey to Lithuania to Austria. It’s a well-imagined plot interwoven with twists that you don’t see coming, and even in the final showdown you don’t know who you’re rooting for.

The comedy is mostly strong, dependent on Kunis and McKinnon’s great chemistry. The two make for a great comedy duo: minion jokes during torture scenes, screaming ‘I just killed someone!’ as they make an escape through public streets… and that’s just the two from the trailer (no spoilers here). The film is full of great scenes and one-liners, and whilst some of the jokes fall flat, there is plenty to be enjoyed.

This is a film of two genres: action, and comedy, and the two don’t gel that well in this one. Each is, in its own right, good – engaging, exciting action to keep you on the edge of your seat, and lots of laughs from the great cast. The Spy Who Dumped Me is a lot of fun, and generally a very enjoyable viewing experience which has something for everyone. Not perfect, but definitely one I recommend.

It snowed
❄️
Firework night etc
Lost this wonderful woman a couple of days ago. here’s a few pictures I had to hand.
🚝
Impossible to take a bad sunset pic
Some Porto

Check out my football articles published on The Footy Faithful